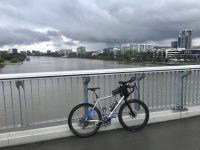 Whilst not an ‘audacious’ ride for a Randonneur, I see the role for a 50 km Brevet Australia (BA) / Brevet Permanent (BP) as two fold — as an excuse for a pleasant morning or evening group social ride, or as a ‘gateway ride’ to introduce a new rider to the concept of randonnees. Whilst I am only new to Audax myself (this ride was the first day of my third season), the reason for me to do this very scenic ride was goal orientated — a 50 BA or BP is required to be able to collect every Audax Australia distance medal over the four years that the medal design is valid for–and my OCD requires me to collect the whole set!

I planned to fly into Brisbane for a F-111 aircrew reunion dinner, so booked early enough that Friday to squeeze in this 50kms ride as a BP. The main ride was to be a 200BP the following day. Unfortunately I forgot to account for the lack of daylight savings in Qld, so after bike assembly and change into kit on the side of a suburban road, the ride started late (actual start time detailed o the Brevet card, with ‘selfie’ time and location evidence).  The ride started with a rapid pedal down the riverside bike path towards Toowong Village, onto Sir Fred Schonell Dr (past an old apartment building residence of mine, back in the day), and through the University grounds. There were only minor issues with traffic (taking the lane prevented close passes). The ride into Indooroopilly was uneventful until the quick descent down Riverside Terrace, where, hitting a bump in the road with my hands on the hoods, the handlebars rotated down about 30 degrees–making slowing down from 40+kmph for the now slightly damp corner a little bit exciting, especially with a few cars in close trail. After finally stopping in a safe place, and admonishing myself for not performing a complete re-assembly bike check prior to the start of the ride, I resolved the issue, and continued out and onto the M5 Centenary Highway bikeway to the Jindalee bridge. 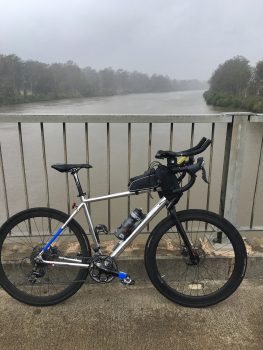 Another ‘exiting’ descent in steadily increasing drizzle (oh, for automatic wipers on my glasses!). A few minutes later, heading out Seventeen Mile Rocks Road, the drizzle had turned into a near-tropical downpour–no point in putting on wet weather gear now! Road litter–especially lethally slippery Jacaranda flowers were to be avoided! It was also a little bit sketchy on roads with flowing water until passing Oxley railway station, when the route kicked into the quiet suburban streets again (oh–more Jacarandas!). Through Corinda, Sherwood, Graceville, and then the very delightful ride along the river bank through Chelmer, Tennyson, Yeerongpilly, Yeronga, and Fairfield. (So many suburbs in such a short distance!). 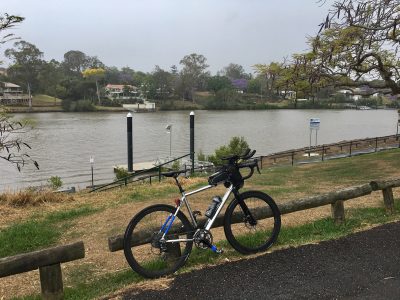 The final climb of the fairly flat route was the corkscrew in Dutton Park under the Eleanor Schonell Bridge up to Gladstone Rd for a few kms before dropping back to the river at West End for the photo (selfie!) finish at the West End Cafe.  A little bit of food, but it was quickly time to get back across the river and to the car to get out of the wet gear. Overall, the River Loop 50 is a nice, quick ride, probably not ideal to be done during commuting time due to road traffic, or in wet conditions during Jacaranda flowering season, but outside of those times, relatively comfortable for ab initio Randonneurs (IMHO!) 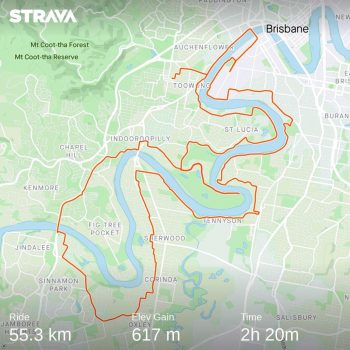 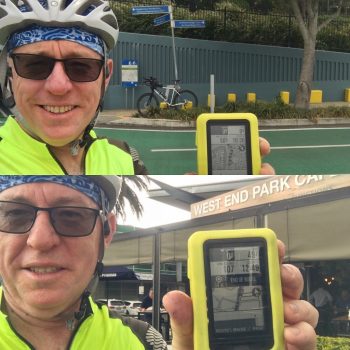 Postscript: Finally getting to bed around 4 am after the reunion dinner, and after being in a nightclub which had a neon sign saying ‘if the music is too loud, you are too old!’, (and looking around and realising I was at least a decade older than any other patrons!), the 200BP was a DNS! So, I was glad that I did get the 50BP in.