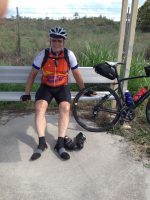 Middle Park Medley is my favourite mixed distance group of rides as all distances share the same route (100 km 50%, 200 km 75% etc.) of the longer routes. This means that riders get to share the first part of the ride with riders doing different distances. The usual suspects and a couple of newer faces started arriving early with plenty of time for greetings and to get ready for the ride. Nine riders lined up for the start:

Everyone was ready to roll at 6:00 except for Christian who had a little more preparation before he was ready to start. He waved us on with the expectation to catch us. The day was always going to be hot with storms predicted later in the day so the pace was set at a steady pace.

We settled into a nice rhythm chatting about past rides, tandems, PBP etc. I was keeping an eye out for Philip (doing his first Audax ride following heart surgery) who was riding off the back a few hundred meters. George was enjoying the chat as usual when I pointed out that Philip had drifted off the back when I lost sight of him. George dropped back to ride with Philip saying he came to ride with Philip.

Our first control was at Peak Crossing, the turning point for the 100 km riders. After a bite to eat and water bottles were filled, the 200 and 400 km riders headed south towards Boonah.

Big Chris, while setting the pace early, started to feel the hills. Little Chris decided to stay with him and let Emery and I continue as we had a lot of work in front of us doing the 400 version.

Emery was quite taken by the scenery heading into & through Boonah. Boonah is a very picturesque town nestled in the valley. The local yobo was a laugh, intoxicated & wandering a bit on the shoulder of the road at an early hour. After his girlfriend urged him to move over, he quirked jokingly that he could sue Emery if he had run him down.  People will do anything for a bit of extra cash.

Emery recalled Little Chris calling Mt Alford, Old Man Alford. He didn’t understand until he . He found it a fun climb, however, although the sign said 12%, his legs told him that some of the gradients were steeper and the heat certainly added to his experience. 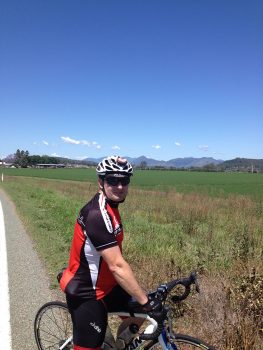 Emery with Mt Alford in the background started climbing

Moogerah Dam is always a beautiful sight. While I stopped to take a photo Emery continued around the corner only to be confronted with a herd of cows on one side and a young calf on the other. He had a Mexican stand-off wondering if they were going to run over to the calf or the calf was going to run over to them. He crept slowing through the middle of them, as he had no allusions about who would come off best in a confrontation. When they started to run up the edge of the road,he quickly slipped past. They had vanished by the time I came around the corner.

Kalbar was our next stop: food, water and sunscreen. As we were about to leave a stream of motorcycles was an impressive sight, especially the sound of the motors & how the lineup stretched into the distance. We were a bit concerned coming out of Kalbar that we would form part of a motorised peloton and be disqualified for mechanical doping. Imagine the sight to passing traffic, us in our lycra, surrounded by a sea of leather.

The heat of the day got the better of my feet. I had to stop and let them cool down. A bus shelter certainly made the option pleasant. We had a quick stop for water at Rosewood before heading to Fernvale where could see the signs of fury from the super cell that destroyed parts of the town and surrounding area.

As we were about to leave Fernvale, Christian appeared ready for fuel as the heat and hills had taken their toll on him. Emery, whilst loving the rolling hills of the route, wasn’t impressed with the false flats heading north to Coominya.

Atkinson Dam looked great with the sun setting in the west. This was one of Emery’s favourite scenes from the ride, and believes anyone seeing this would have wished they were right there capturing the moment riding beside us. 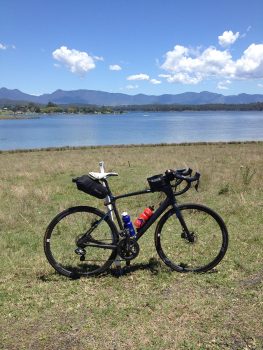 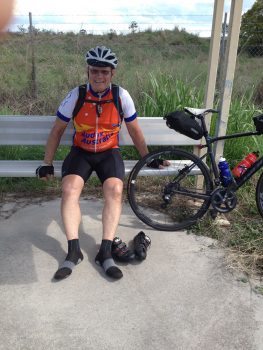 I Required Feet Relief at Amberley

Next stop was Gatton. Arriving just before 8pm food options were always going to be a challenge. Fortunately the local Asian noodle shop was still open. Food was quickly prepared and eaten. They even filled our water bottles but the question was: hot or cold water?

Emery had some friendly banter with a gentleman who called out from his veranda on the road to Lowood inviting us for a drink break; only to give us the best compliment, “You wouldn’t catch me doing that s….”

The other interesting banter was when we were coming into Westlake at the early hour of 3am and a guy calling out to us to have a good ride. If only he knew…..

By the end of the ride Emery was calling me Gandalf as I guided our journey knowing every turn, hill and more importantly where all the water taps were located. I did fail at the end missing a turn into Middle Park and having to get Google Maps out to determine the last 3 turns to the end of the ride.

The Conditions got the better of some of the riders with not everyone completing their ride.