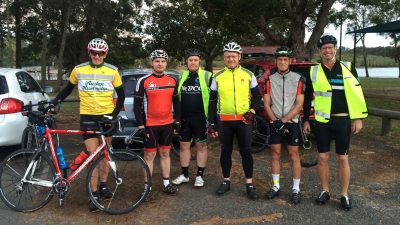 Frank’s ride is one of my favourites. 110 or 200 km in a beautiful part of the world. The terrain and country
is varied (Cane farms to Rain Forrest). We had 6 starters for the 200 km option: Brian Hornby, Craig
Estwick, Peter Watson, Emery Bridge, Iain Cummings and Sean Konings. Iain and Sean were late entrants
but the online registrations system took care of that. David Booth and Keith Heinrich lined up for the 110
km option. David’s second ride after 5 weeks holidaying in the UK. 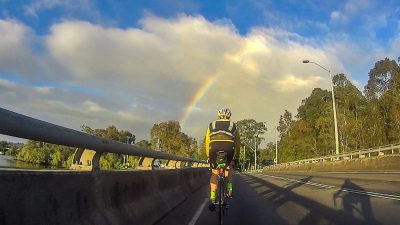 I got there nice and early misjudging the time to get to Currumbin with no traffic on the road. Got my bike
ready only to lose the valve when pumping up the tyres. In the dark it was impossible to find on the ground.
New tube is and all is fine.
The start was delayed due one of the riders disappearing to the toilet as we were about to start. We finally
got away and I have a problem?? The tyre hadn’t seated properly and was rubbing on the frame. Back to the
car to resolve using my floor pump rather than pumping it by hand. Emery returned with me to my car as he
was relying on me to navigate.
Iain, Peter and Sean made a break with Keith hanging on the back of the group. Emery and I caught David
and Craig at Tweed Heads. The four of us rode together for a few hills until Hogans Road where David was
dropped. We caught Keith just before we crossed the Tweed River. Keith was struggling with back pain and
at that point decided to withdraw given he was at the closest point to the start.
The day was never predicted to be hot with a brief shower. As it turned out the temperature hovered around
12-14 degrees all day with a constant head wind that seemed to predict wherever we turned. To make things
worse, the showers turned into rain for most of the day.
Clothiers Creek Road was ridden with some sadness, especially past the point of Frank’s accident. I shared
some of Frank’s story with Craig as we climbed the hill.
Craig, Emery and I spotted Peter, Sean and Iain on the other side of the Tweed River coming out of
Murwillumbah as we were coming into the control. They were obviously travelling well. We stopped at a
café, asking for our Brevets to be signed, the proprietor asked if it was a race. I said no, a timed event.
Spotting my PBP vest he showed signs of recognition and said he was from Brest. Small world. 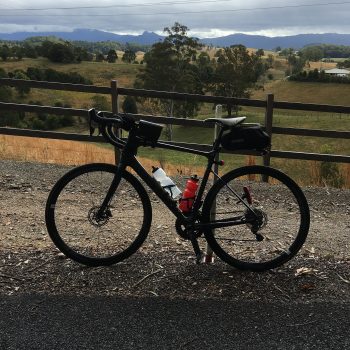 The standard Instagram photo #audax #audaxoz
We continued our journey going over the Burringbar Range stopping at the Pottsville Pantry for lunch.
Craig’s choice as he was reliving memories of a cycling breakfast he had on a previous ride. The rain and
head wind continued as we battled along the coast then back over the Burringbar Range, Stokers Siding and
back into Murwillumbah for a control. Only one more hill (Tomewin) before the finish. It was dark and wet
when we reached the top so descending was slow given the conditions and the knowledge that the week
before a rider was seriously hurt after hitting a Scrub Turkey.
We finished the ride just after 6 pm and surprised that the other 3 riders were still there. Then we heard their
story.
Sean had a slowly deflating rear tyre which showed up going up the hill on Smiths Creek Road. He had a
spare tube but with a shorter stem than required for his deep rim wheels, he had a stem extension to get
around this. Before putting in the new tube, Peter pumped up the old tube to find the leak, which was near
the base of the valve stem, the rubber was delaminated where the thick part starts at this point. The stem
extension broke when attaching to the new tube which made it impossible to get full pressure into the tyre,
they managed to inflate it enough to ride but the tyre wouldn’t seat properly on the rim. He said the bike got
the wobbles going down the hill, which the brakes made worse. They had another go at reinflating it at
Murwillumbah but this didn’t improve it. Peter thought we may have caught then up as they were stopped
for that long.
Just shows you need to have the right gear for your bike. They tried patching the tube but the patch wouldn’t
stick to that part of the tube. Other than that they had a good ride. They stopped at the bakery at
Murwillumbah, the bakery at Pottsville and at a cafe opposite the bakery on the return to Murwillumbah just
getting in before another shower.
David Booth completed the 110 km version.