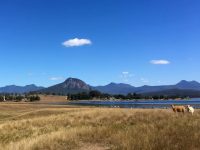 The morning after… Friday the 13th … I woke with a dehydration issue. It could have been the celebrating too hard at a party the previous night. I didn’t want to think too much trying to remember, but I did make a point of remembering to pack my bidons this time. And it’s off to Ipswich for the Fassifern Folly 200. It was the start of a big weekend: the much anticipated Folly, some key stages in the Giro, and the final of the Eurovision Song Contest. It just doesn’t get any bigger than that.

Ipswich – what a dump!  I was monosyllabic at the start. Others were more chatty: “G’day mate, looking a bit green there.” RO Rosie got a hug because I knew I was going to need help getting through this. It was cold, temperatures had dropped down to single figures. Do you wear your arm & legs warmers when you know that they’ll be coming off when it warms up? And when is that going to be exactly? It was cold, it was bleak, it was nauseous. We headed off down Warwick Rd on to the Cunningham Hwy and it became clear that the Bogan index was off the scale. There was a Speedway meet at Willowbank and the roads were full of petrol heads. It was cold, it was bleak and there was traffic.

There was also a heavy fog hanging around that would have looked grim if it were not so bleak. A bit of History: The Fassifern Folly 200km BRM is a fully supported ride run by Rosie G. It was first run three years ago just after Martin P was killed and 30 riders turned up in solidarity in an even male/female split. From the start the hammer was down, the (mainly) female contingent smashed it in a paceline that showed no mercy. If you left the slightest gap, you were gone, dropped out the back. That was the day that the Bedouin got his name, the day we experienced the multiple punctures on the flinty dirt section along Mt Greville, the day the non-Audax Kirsty crew got lost, the day the sun shone. But that was not today, for today was cold and bleak.

The first checkpoint is in a cemetery (you’ve got to admit that’s pretty bleak). 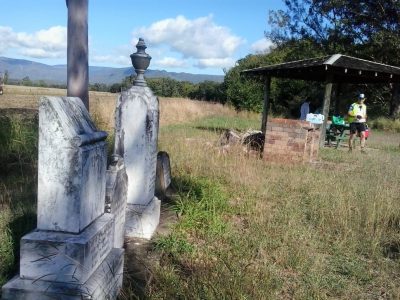 RO Rosie was aided by Ann J who had baked up a storm. Dense stuff: moist, heavy and full of raisons and currents. It was very good. There was coffee. A chink of sun appeared and the mist disappeared in a flash. I looked around and saw the eight starters Brian H, Ian N, Justin B, Mark R, Melvyn Y, Peter J, Peter W, Terry B had regrouped; and for the first time I can remember, everyone is riding together as a single group well into a ride. There are two recumbents (Melvyn & Terry) one with suspension and two Audax first-timers (Ian & Terry).

We are going along the “Scenic Rim” and I’ve got to admit it sort-of looked OK. 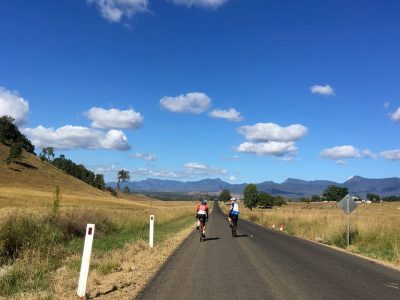 We are now on minor roads and there is little to no traffic. After 6 km of shuddering dirt we come to smooth tarmac descent into more “average” looking countryside. 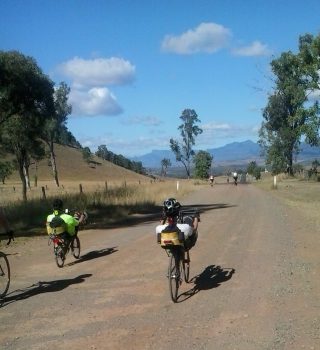 Next up is the flinty gravels stretch in front of Mt Greville. (Wisdom says tyres must be at least 28 mm wide and supple, or you will explode.) Brian has a spare folding tyre. The second checkpoint and things are starting to look Rosie. (Rosie has started a new job, in banana R&D and has procured some of Queensland’s finest for our needs.)

The warm sun caresses us as we encounter more and more spectacular country-side. 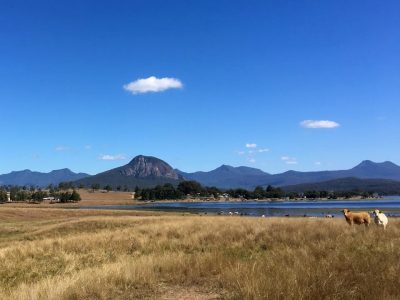 The ride is “flattish” by Brisbane standards (1750m / 200km) but the run down Mt Alford does give you a bit of momentum.  I note from Strava that both the recumbents did 76.3 k/h down here without even trying. The peloton stretches out, forming ambling groups. Peter W tells me he is taking it easy as he has to ride the Mt Coot-tha Challenge tomorrow, and then he rides off the front. Brian discusses the possibility of making a Mailbox Map as a retirement project. Melvyn talks about his recently completed first 600 km BRM, over a year after his first 1200. Peter J was wondering about the pro cyclist with the “Only God Can Judge Me” tattoo. Justin was taking lots of photos. Terry was comfy on the recumbent. Ian just put in a great ride.

More History:  The Fassifern Valley was settled by pastoralists in the 1840s but remains sparsely populated today. It probably has more cemeteries than towns. It has a real Teutonic flavor with a high density of Lutheran churches. It is also the carrot capital of Australia. And yet – I did not see a Big Carrot. No -the refined folk of Fassifern don’t go in for that sort of stuff. Their tastes are more cultivated, like this.

But what a day it is turning out to be! The scenery is simply stunning.¹ 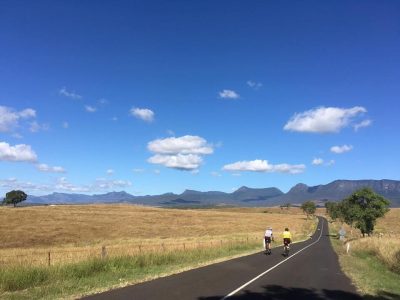 Around the 3rd checkpoint, the ride route offers us many chances of “intermediate passage”² that may have been put in to tempt us. Sorry Rosie, we are made of stronger stuff. Plus, we don’t want this ride to end.

Ipswich – what a great place!

Coming back along Middle Rd a rise offers a view of Ipswich as golden light from the sunset dapples the town,  sorry, the City of Ipswich, with views to the D’Aguilar range in the background. 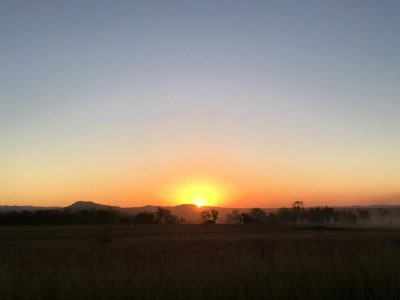 And no one threw anything at us. We arrive as dusk is settling with lights ablaze and reflectively lit; just because we can. Is there ever a perfect ride? Yes there is. Thank you Rosie & Ann. The rest of you keep searching. Then come and do the Folly.

¹  I have a poor phone, thanks to everyone for the photos.