The Road Alone (Carls report on the Aching Armadale 2022 Ride) 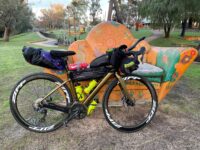 I suspect like many of us this time of year, I find the idea of cycling is a lot more appealing than the actual doing. As cold weather fronts blast through the Metro area, I am more inclined to give into the temptation of getting my cycling fix in front of Tour de France and Vuelta a Espana replays on GCN than actually pushing the sweat wheel out of the garage.

Hence the arrival in my Inbox of Glenn Mitton’s advice that the “Aching Armadale” was being delayed a day because of the threat Saturday rain came as a challenge to my natural inclination to stay on the couch. Still it wasn’t an invitation I was going to take too seriously, all thing considered.

Decision made, and halfway through Sean Kelly and Steven Roche’s biography “The Ascent” it then occurred to me, even someone half as hard as Sean Kelly would not be deterred by a little rain. After all, if half of Belgium is happy to spend 8 months of the year clad in Gortex, maybe cowering on the couch is not in keeping with my aspirational goals.

Armed with new found bravado, I dialled up our Audax home page and impulsively hit the ride registration button.

Given the build up, and the amount of wet weather gear hanging off my bike, it was therefore with some surprise I rolled up to the Armidale Train Station to an absolutely glorious winter morning on the Sunday. It was also then I discovered if I had paid more attention to the ride program instead of the threat of rain, I would have arrived on time, instead of 30 minutes late, and thinking I was still 30 minutes early. Glenn Mitton, ever the gentleman, made light of my lack of punctuality, despite the fact I had dragged him out of bed way too early on a Sunday morning. That said, the fact the rest of the club had not been stirred by tales of survival on Belgium and French roads, meant I had the course to myself and Glenn was cast more in the role of a coach seeing me off a lengthy training ride, whilst I felt more like the “primadonna neo pro” my too casual turning up in my own time suggested.

Thirty minutes later and still with time to make up, as is usual for me when getting out of town, a couple of wrong turns and a little back tracking as I followed the circuitous route out of Armidale saw me fall a little further behind my personal timetable. Though by the time I hit Byford the shaky start was a thing of the past and I had my first climb of the day up to Jarrahdale to look forward to. More surprising was the need to start shedding layers as the day warmed up, along with the work required on the bike. It was about this time it also became apparent that the threat of continued rain over the weekend also brought other surprising benefits. The normal stream of middle aged Hell’s Angels on motorbikes one would normally expect tearing up the roads in the Perth Hills were also noticeably absent, pretty well leaving all of the roads to a middle aged man on a push bike. Of course, the only car I did pass on the road winding up to Jarrahdale did manage to flick up a large stone that has since required some expensive carbon fibre repairs, which is possibly the price of hubris. However, it was going to take more than that to spoil a morning of almost perfect riding conditions. Barely a breeze, and mild temperature conditions tailor made for a steady climbing workout are not to be sneezed at.

Deciding to bypass coffee at the Jarrahdale Store and Post Office and too early for a quick beer at the Pub, I elected to keep going whilst the going was good, with the idea of getting the best use of the roads whilst I still had them to myself. The portion of the route Jarrahdale through to the Serpentine Dam and back to main road was new ground for me and very pretty at that time of the morning. Again, I managed to avoid the temptation of a coffee at the Dam Cafe, mindful of the fact I had some time to make up.

The next challenge for a man built more like a power lifter than a bike rider was the climb up to Dwellingup, via Del Park Road. Whilst I have done this climb many times before, turning off for an early descent via North Spur Road was also new ground. I normally sustain myself getting up Del Park Road with the promise of a chocolate milkshake at the Blue Wren Cafe, so it was with some reluctance I turned off early onto the North Spur Road. More shocking was the fact that North Spur Road required a whole lot more climbing than I expected, though the sting of this surprise was soon forgotten as I hit 80 km an hour on the final descent back down to the main road and Pinjarra. I don’t doubt higher speeds are there to be had for those more familiar with the road and with more nerve than I have.

Pinjarra turned out to be a hive of winter lunch time activity on my arrival and again the temptation to park the bike and join lunchtime crowd was hard fought. The curiosity of the crowd, finding an endangered MAMIL among them turned out to be the deciding factor, and I limited myself to grabbing a signature from one of the Baristas, instead of the more tempting mud cake.

Hills behind me and nothing but flat lands and light crosswind between me and the end of the rest of the course left me quietly confident that making the ride’s time limits was not going to raise any real difficulties, though I was mindful of the fact that the last time I was this far south on the Perth Shared Path (PSP) I ended up in the shrubs when I blew out a tubeless front tire. Fortunately on this occasion I was spared both this kind of excitement, as well as the usual weekend Baldivis teenagers using the PSP as a motorcross training track.

Thanks to my unusual work ethic and the absence of any real crisis on the route I was back at the Armidale Train Station just ahead of the setting sun, on what had turned out to be an absolutely brilliant day out on the bike, over a route that offers a little of something for everyone. So much do I like the route it has now been added to my list of training routes for some of the bigger rides which will no doubt come up as we all get off the indoor trainers and return to outdoor riding now the worst of winter is hopefully coming close to being behind us.

In short, the ride was definitely far from the suffer-fest I had in mind when I signed up.

Many thanks to Carl for penning this report and Perry for creating the Route.