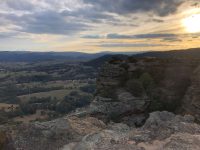 You know it’s going to be an interesting day when a bird attempts suicide just as you arrive at the start (bird is fine).

Group of five (4x 300 and 1x 400) set off. I soon got dropped as we missed a turn. Trudging through the back streets and alleys, I realised it was going to be a slow day when I still had more than 300 to go after 45 minutes. There were a couple people doing the 200, but they were late and started after us.

Forty kilometres in I’m thinking I should have done the 200, do I really need to do two SRs in a single season? Doing the 300 would leave the option open

Felt a bit more positive once I’d hit the base of the climb at Penrith. Just settled into a nice rhythm and spun my way up. Hadn’t been past Springwood to this point so that was a tick on the list.

First checkpoint was Blackheath which seemed to take forever to reach. I arrived just as Bhanu and Soufi were leaving. Knocked back a smoothie and hopped back on. Quick pit stop at Mt Victoria, followed by the decent.

Rolled up towards the Lolly Shop and I saw Bhanu and Soufi, with his bike upside down. Soufi had found some gravel on the decent and had a little spill. Rear wheel was a bit wonky so he was adjusting the spokes to straighten it a bit. I ducked into the shop and grabbed some fluids to top up.

We then set off off down Cox’s River Road. Very quiet and picturesque road. Hills still are not my friends and the guys dropped me on the climb out.

A quick dose of ibuprofen (my back was playing up with all the climbing) and then it was on to Lithgow. Did a quick sweep but I couldn’t see the guys, so I scoffed a couple of Icy Poles and an iced coffee and headed off towards Hassans Walls. Did the lookout thing and then just as I got back to where the bike was the guys showed up. They had stopped on the way into Lithgow and I had ridden past them.

I rode on figuring they’d catch me soon enough. A nice little gravel downhill and then back on to the tarmac. A fast downhill, then a quiet road changing to gravel. Looked down at one point to see a crashed car, thought I’d better just check it’s not recent (it wasn’t). Back on the tarmac to Mount Victoria and then left for the run home.

Had a car pull into a break down area in front of me.I’m thinking okay, pass to the left. Get a bit closer and the reversing lights come on “Oh shit”. Horn goes and the guy yells something indistinctly (but not angry) so I stop. “Are you riding with those two others? I could barely see one of them” (massive relief at this point) I said I’d wait and let them know. Chatted with the guy until they showed. Nice that someone had a genuine concern for our safety and good feedback on my night setup “Yeah, saw you clearly”

So we rode on as a bunch until I hit a couple of big bumps and one of my bidons flew out. It skittered across the road and I was just about to get it when a car nailed it. Bottle seems okay but the lid is no more 🙁

Knew I couldn’t catch the guys so I just kept going but didn’t push it. GPS died at Warrimoo so onto the backup RidewithGPS in the pocket. Bumped into the guys at Penrith where we decided to have a proper feed. The Thai was good. Stole some power from Bhanu so I was back with navigation.

Made our back to the finish with some navigation alterations and finished just after midnight. Such a long, long day.