The Midnight Century is an iconic Queensland ride, commencing at 11:59pm at Fernvale in Queensland, with quicker riders getting to watch dawn break or sunrise appearing over the Wivenhoe Dam. This ride has undergone a route change in recent times and Simon Faber re-designed the route to retain the key features whilst allowing support to be centralised from Fernvale.

This the 2019-2020 season I volunteered to be the ride organiser with assistance from Tara on the night and being a supported ride, I got to have an early ride of the route. The advantage of the early ride is I can advise riders of any idiosyncrasies of the route in the briefing. For me, I elected to start riding at 4am to avoid traffic on the Brisbane Valley Highway and most of the way back on the first loop before most people were out of bed.

Great plans of mice and men and that sort of thing I planned everything, put the bike in the car (after tweaking a couple of things on the bike stand) set the alarm with the intent to leave home at 2:45am. In true fashion (doing a Jeff) I left late and few km on my way realised that I had left the tail lights at home (after taking them off to lock the seatpost in the bike stand…) so returned home to find both lights and then head off again.

I arrived at Fernvale at about 4am and proceeded to prepare for the ride with the camelback and hi vis. The morning was a little crisp at 15 degrees and I headed off slowly southwards along the Brisbane Valley Highway and just beyond Fernvale the road had been narrowed with barriers to allow remedial works to be carried out on the eastern cutting. Fortunately the traffic as I went through was non existent and enjoyed the ride south towards Pine Mt Road. By this time, the day was starting to get lighter and by the time I was part way along Pine Mountain Road visibility was getting better and I was amazed as this was the first time I had arrived at the end of the road in daylight. The undulations on the road were certainly easier in daylight.

The descent into Brassal was a little slower than previous years as I was taking it easy – this was my longest ride since Easter and I wanted to enjoy it as much as possible. Once again, the route through Ipswich was very different due to riding in daylight. The day was overcast and turning humid as I rode through Waloon and turned towards Haigsley. The last time I rode this way was on a UAF and I didn’t get any surprises along the road and found the climb at Haigsley a bit easier than last time and it seemed less steep. Once across the highway, it was a simple run to Glamorganvale and Fernvale, although I was starting to get a bit weary and hungry.

At Fernvale, I stopped for a salad sandwich and a museli bar before shedding the hi-viz and starting loop 2 which heads out towards Coominya and back over the dam. I like this part of the route because it is a little quieter except for the tractor overtaking me on the way. I discovered a memorial at the start of Remembrance Drive, Lowood Aerodrome which is easily missed when riding at night. As I arrived in Coominya I recalled a young magpie swooping a couple of years before and thought about evasive action as I rode past the church but it must have been otherwise occupied as I rode on. After a brief stop at the top of town I turned east into the headwind of the morning making my way to the Brisbane Valley Highway and towards Wivenhoe Dam. As I rode the highway, traffic was becoming more frequent and was soon passed by the police catching up to an errant driver, both of whom were just on the edge fo the road. Applying caution I checked for traffic behind before rounding both vehicles and heading towards the dam. Soon after I met a convoy of dozens of utes rumbling towards Esk. With the dam just over the crest of the hill I planned to stop and take some photos in the daylight and was surprised to see a small mound in the lake totally covered with birds.

In the cutting just after the dam I found what looked like the home of the world’s largest bees but was in fact the exposed re-enforcing mesh of the bank.

As I was looking at the bank, the second convoy of utes passed. Fernvale was only a few kms down the road so I continued on to second breakfast.

As I arrived in Fernvale, a morning storm started to rumble and I headed to a table to have a bite to eat only to be joined by some breakfast guests. 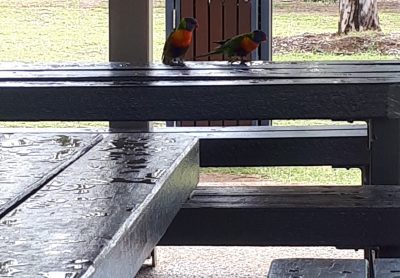 It started raining so I decided to delay the next loop. When I was getting ready to head off again, a second pair of guests arrived – Tara and Heath on a permanent ride. After a brief chat we parted ways with me predicting I would be caught by them at Glamorganvale. Not quite to be – it was actually halfway between Glamorganvale and Marburg where we traded places depending upon the ascent or descent. Along this leg the rain was a little intermittent and thunder rumbled overhead panning stereophonically from west to east.

I stopped to take a photo of Tallegalla hill before turning onto the road and surprised myself with a relatively easy if not long climb. After the top, it is pretty much all downhill or flat (except for the Lowood lump) with the only tricky part being the highway crossing at Minden. The stretch towards Lowood was eventful as a maggie decided to strike and grab my ear with his talons. This was a first and I decided to start experimenting with the maggie as he continued with subsequent swoops. What I found with him and the next on the other side of Lowood is that if you look like you are watching them, they will fly close but not strike. With the first, I kept an eye on him. The second, I just kept an eye on the road while turning my head – on occasion I looked back out of the corner of my eye and saw him flying less than a metre from my head but no closer.

As I got to Lowood, traffic was a little busier and was nearly taken out by a horse float as the driver started to pass me then turned left before the float had actually passed. Good thing I was awake and alert at the time. Fortunately the rest of the ride back to Fernvale was uneventful except for the second magpie of the day.

Overall I was quite pleased with my ride, about 9 hours of actual ride (but had the added 30 minutes from the late start) and was a good warmup to my first 200 since Easter.