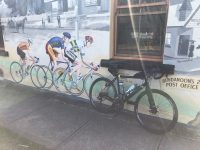 Second attempt at running this ride. First put off by the windpocalypse a couple of months ago.

Mark, Francis and Garry came down from Sydney, Kevin and I locally and Doug joined us from Queensland (Impressed he made the start time 😉

A quietish run out to the base of Macquarie Pass for the feature event of the day. The climb through the rainforest was good, with more traffic than I’ve seen on it at that time, but they were behaved. Turning at the Tourist Road we headed into the dry gumtrees and farms of the Southern Highlands. Next up is Range Road which starts with nasty little pitch before wending it’s way towards Mittagong. I nice quick run into the ‘Gong before the much need coffee.

Out of Mittagong we head west on Wombeyan Caves Road before joining the Old Hume Highway towards Berrima. Through Berrima, a quick dash on the freeway took us on the road to Sutton Forest and then to the back of Exeter. The road I selected took us behind Exeter and as I said to a couple of people “It looked flatter on the map”. All I can say is, it must have been interesting when it was gravel. Second stop was Sally’s Corner where pies were had.

From Sally’s Corner we had a stretch down the freeway. I had ummed and ahhed about including this section but without it there was no sensible way to complete a loop. While the shoulder is wide, it is filled with rubbish and there is a bridge with no shoulder about half a kilometre from where we turn off. Thankfully everyone got through okay.

Off the freeway we were back on to quietish country roads to Wingello and the Highland Way before turning to our final control at Fitzroy Falls. The General Store has a goodly selection of pies, however they have less now. 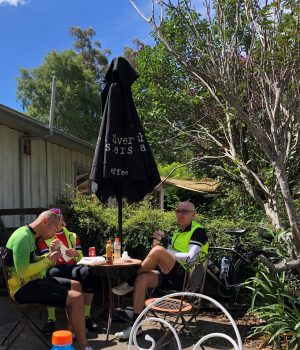 The last stretch was 48km with the promise of a nice downhill via the Pass to the coastal plain. Mark and Doug hadn’t done the descent before and I do think it is a just reward for the earlier climb.

Back to the finish through some back streets and everyone finished within 10 minutes of each other, which was nice.

Thanks to the guys for coming along and sharing the ride with me. I hope everyone enjoyed themselves.

For me, this marked my first ride as a Ride Organiser and I’m happy that everyone got back safe with no issues. It was also the first full ride for my new bike that I put together myself. It handled the distance beautifully, apart from a creaky bottom bracket, which I’ll need to sort out shortly. And the brakes worked coming down Macquarie Pass which was a big concern for me. I don’t like pain 🙂