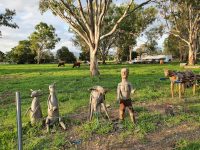 This was to be my first 300km ride. My test to see if there is any hope for my ambition to become a Super Randonneur.

I had been googling like mad to get some hints on how to survive the ride, when the answer hit me on Facebook. Another Audax member had done the clever, and in hindsight, obvious thing of asking the Audax group for hints. The major advice I took away was to only use gels etc for emergency, to eat ‘real’ food at each control. I had planned to take 12 gels and energy bars. And was not looking forward to subsisting on that.

Up early to get to the start well before 6am. In truth I had disturbed sleep, excited and worried I might miss the alarm.  I think I was the first car in the park, then the others arrived. All new faces to be except Paul and Brian. I was happy to meet Ruth and Shayne, who were also doing the 300K. And even happier to learn they were content to ride together, at least for some of the way.

We were off just after 6 and Shayne led the way to Goodna. Traffic was light and we made relaxed time to the Goodna control point. Everyone was full of energy, so this was just a sign and go, barely got off the bike.

Fernvale bakery was our first refuelling stop. Wonderful BLT sandwich with crinkle cut chips. Not sure if it was just the salt, but the chips were delightful. Downtime was 31 minutes. 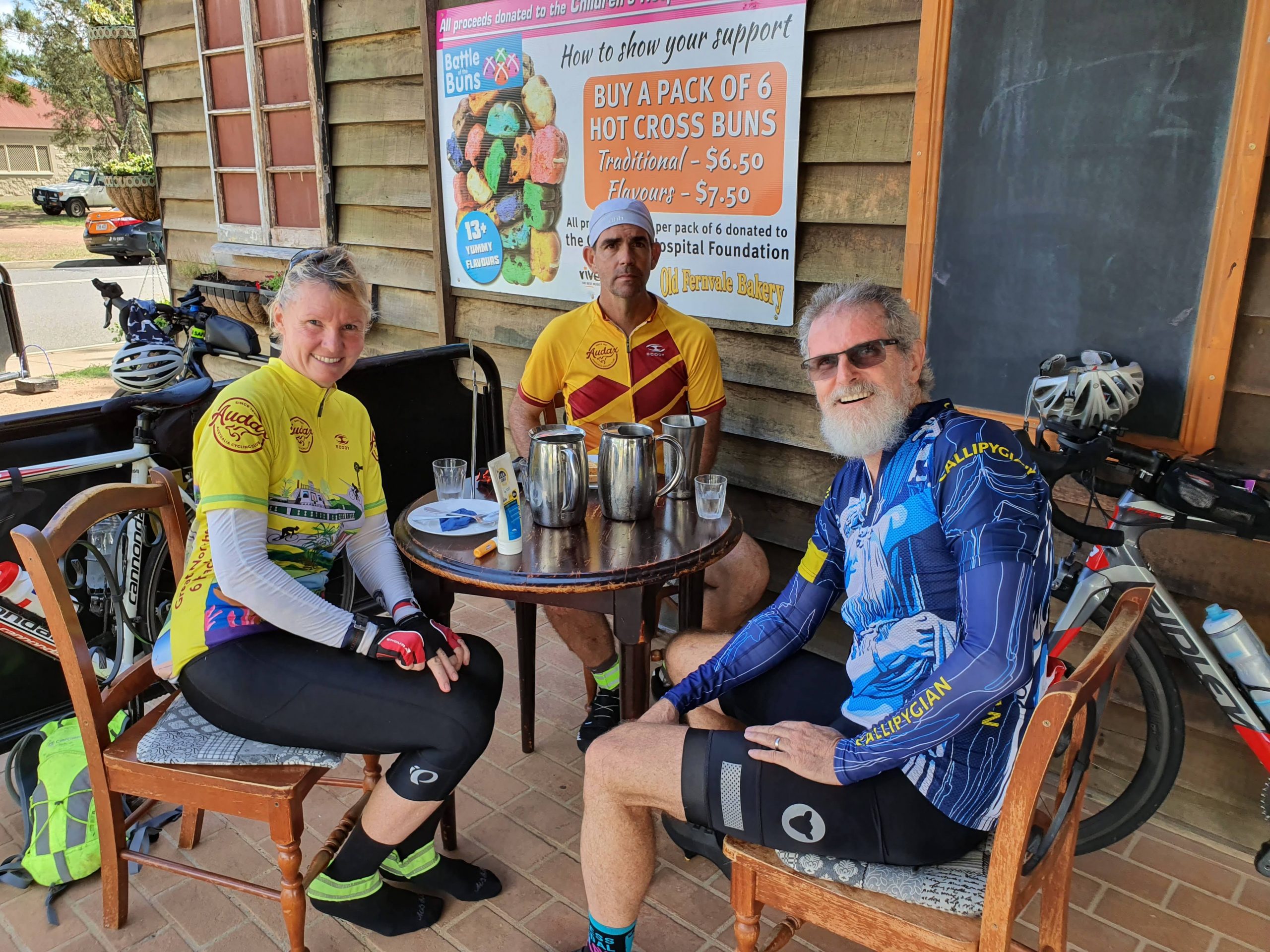 It had been an easy ride so far, with intermittent, entertaining conversation. We left Fernvale together but now the rubber band began to stretch. We seemed to be going at the same pace, but just a few hundred metres apart. I found this section more difficult, perhaps because there was some solo riding, or perhaps it was the climb to Esk. It was a longer leg than the previous two, and I ate one of my energy bars to keep going. A highlight fo rme on this section was the intent examination Ruth and I received from a black cockatoo that leisurely flew across the road in front of us, giving us the beady eye. Perhaps he was admiring our beautiful plumage, me in my callipygean, Ruth in her awesome P-B-P.

Shayne eventually disappeared up the road But I met him again at Esk. Which was helpful as I was about to ride past the control point until he called out. He had been there about 15 minutes and was just finishing his lunch. Ruth arrived a few minutes after me, and the three musketeers were reunited, briefly. Ruth and I left together after a scrumptious salad sandwich. My downtime was 46 minutes. I was mindful of Brian’s advice to ‘keep pedalling’.

The segment to Kilcoy was the hardest segment for me. I think the main reason was the temperature – it reached 38 degrees, and towards the end I was low on water. Two bottles were not enough for me. I may have to investigate those water backpacks.

This section was also the prettiest for me, and I took many more photos than I have included here.  I never knew that Somerset Dam is an engineering heritage site. 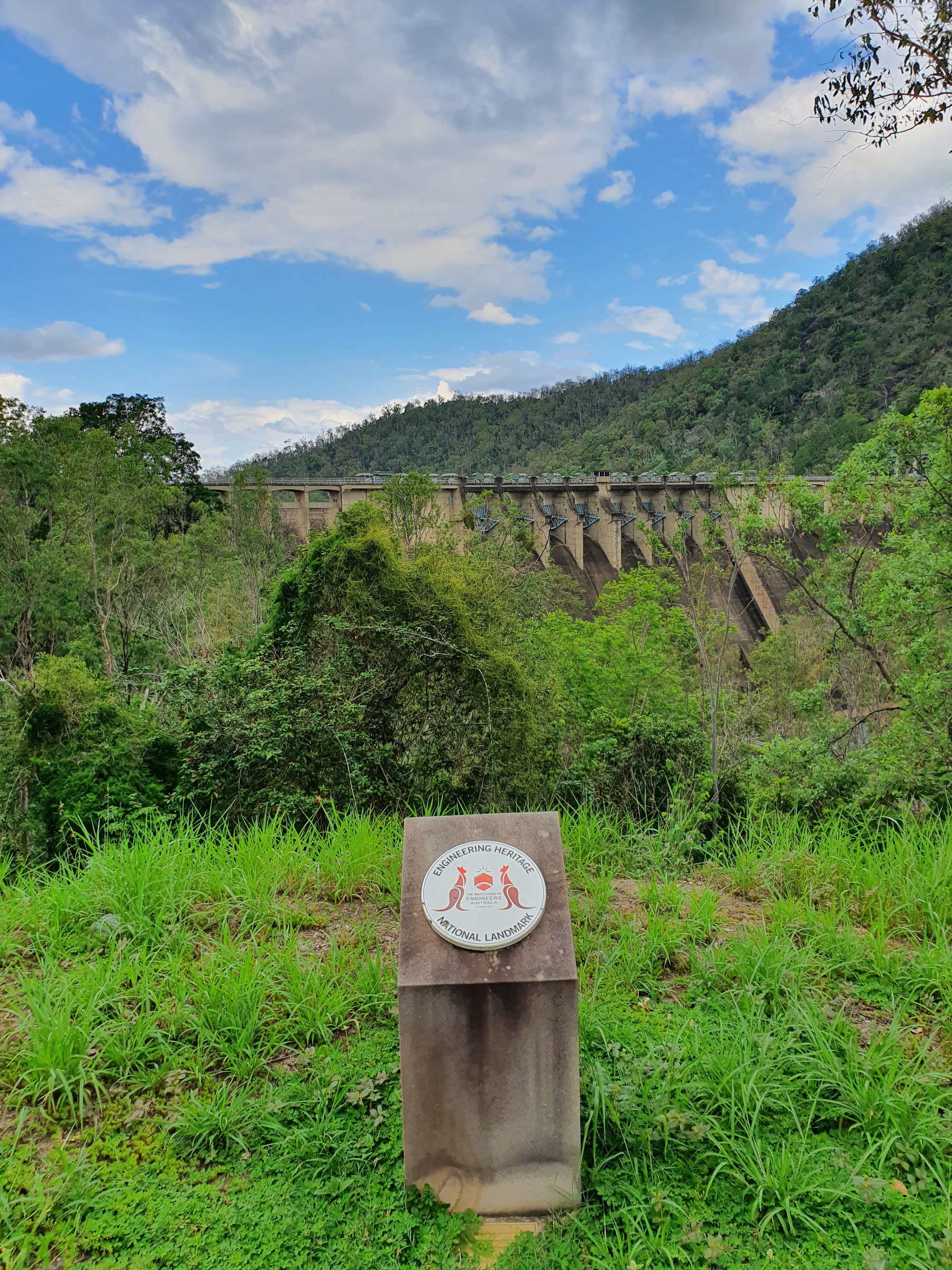 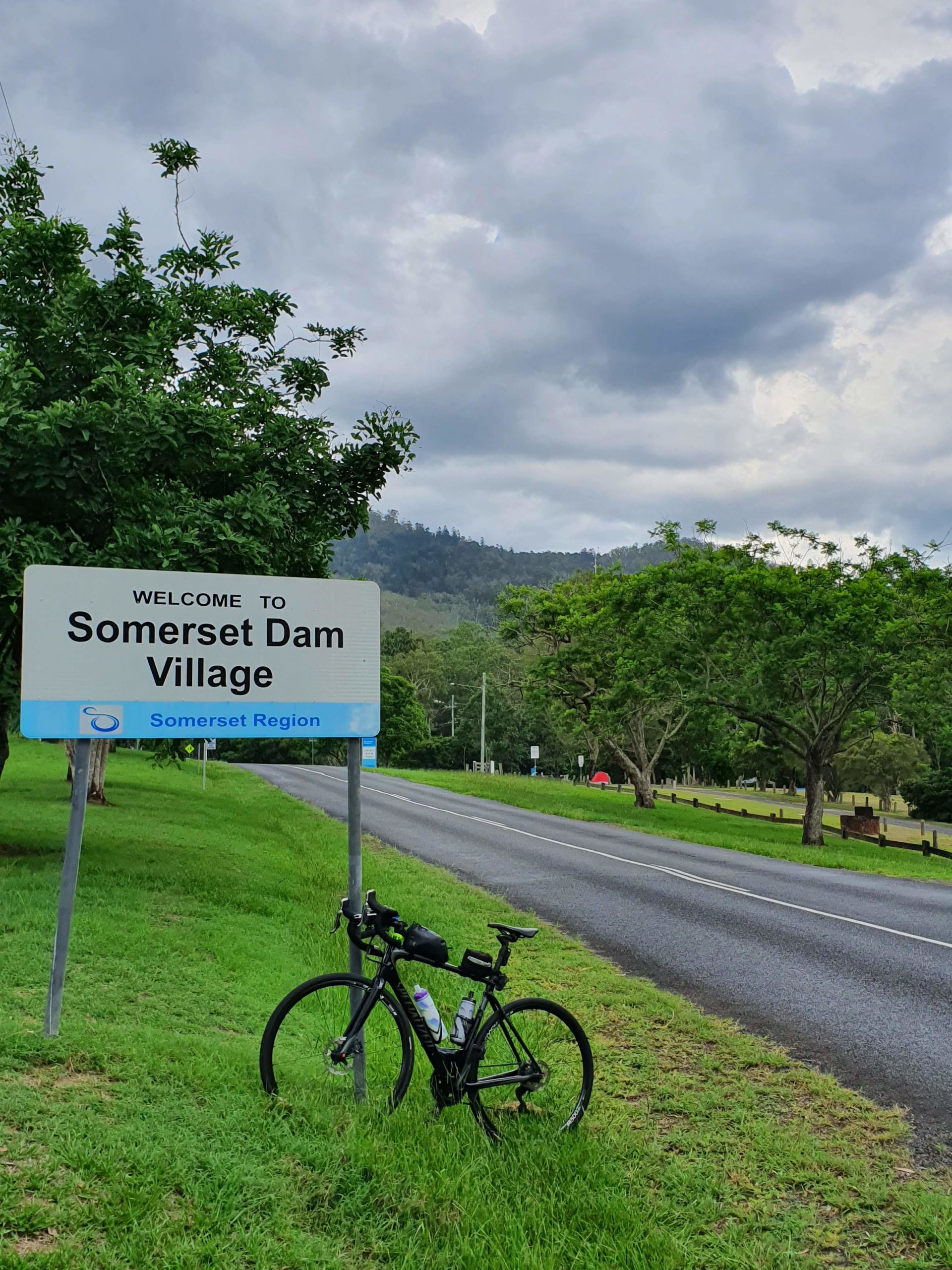 I rode the last third alone and found listening to a podcast as I rode very helpful. I have these great bone conducting earphones that don’t mask ambient noise, so I feel safe to use them while cycling. 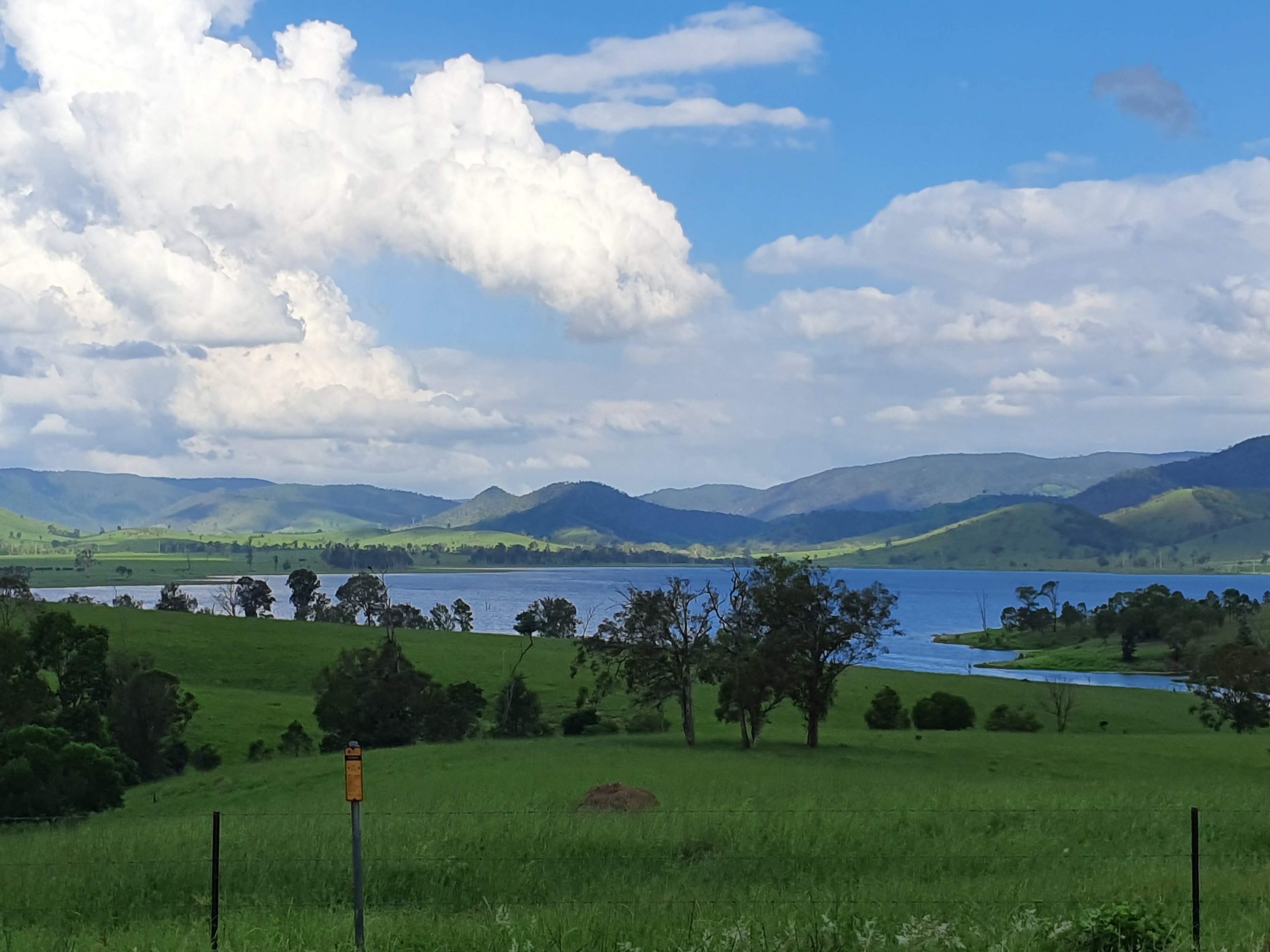 Shayne was waiting for me at Kilcoy, he had been there about half an hour. The air conditioning in the shop was greatly appreciated. The first thing I bought was an ice block. Very refreshing. Although I wasn’t hungry, I thought I should eat something, so I grabbed two bananas for the road, strawberry milk and a rissole for now.  I said goodbye to Shayne when he left as I did not expect to see him again. It had been fun catching up with him at the controls, but I didn’t think he would stay long enough at Morayfield for me to catch him.

Ruth arrived shortly after Shayne left. Shared commiserations about the discomfort of 200K in the saddle cheered me up. I had planned to leave Kilcoy with Ruth, but she encouraged me to head off when I was ready and try to catch up with Shayne. 51 minutes downtime.

It was not yet dark when I left Kilcoy, but I started the flashing front and rear lights, and put on the reflective ankle band. Now for the final 100K – all new territory from here for me. LONGEST RIDE EVER!

There was a head wind now, so I spent a lot of time in the drops. Supposedly it is 10-20% more efficient, and I needed every advantage now.  I thought if I have any chance of catching Shayne on the 61K leg to Morayfield I can’t stop for photos, so the Pyramid house was a drive by picture. I am pleased I didn’t drop the camera or the bike. And looking back, I am also pleased I was not fined $1000 for touching my phone. 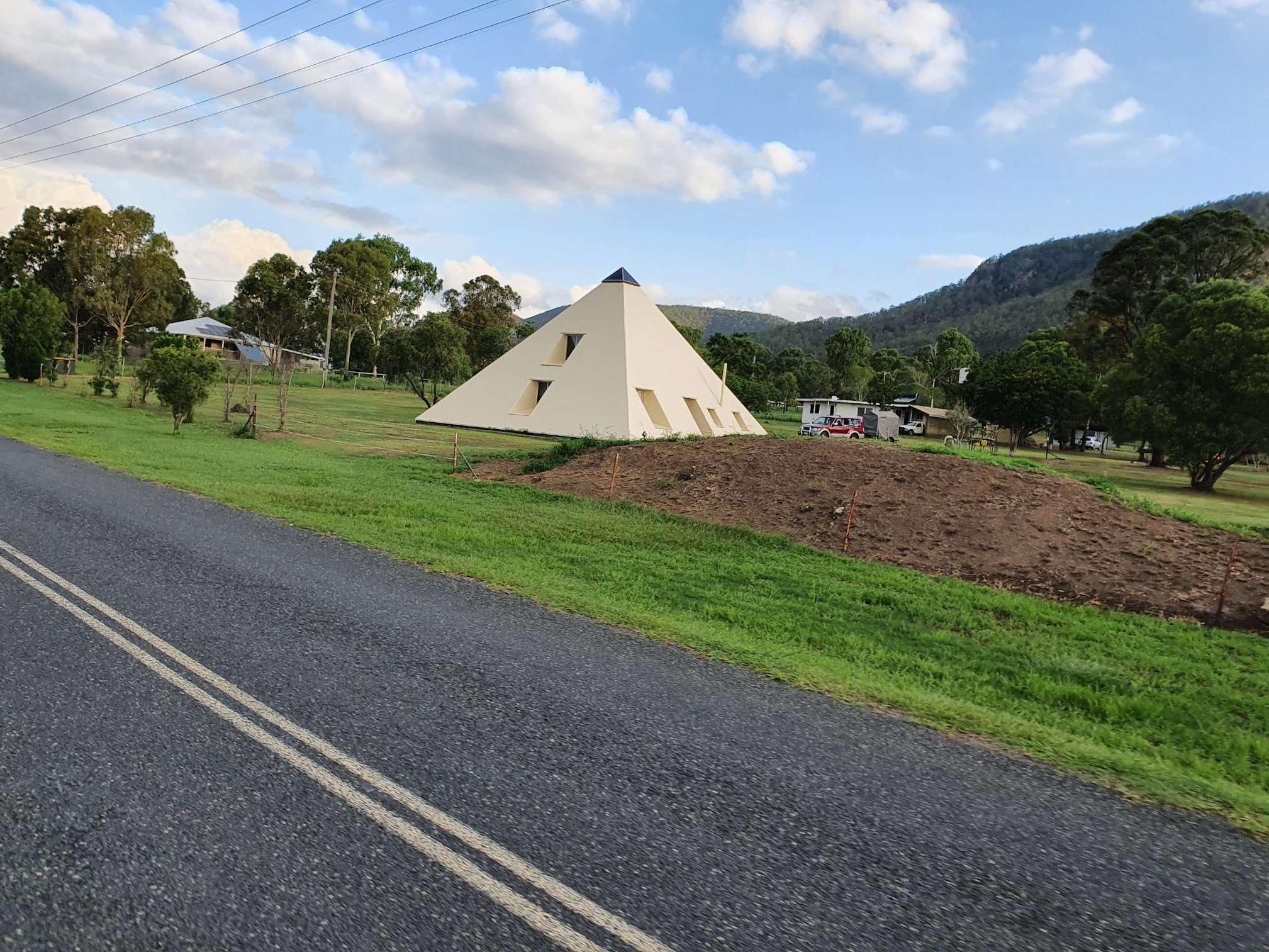 The sun set rapidly, and I found it the absolute darkness of unlit country roads disconcerting. I was annoyed that I could not free wheel down hills – I need a spotlight! All that work going up hill but I couldn’t enjoy the down dale.

There was a kilometre or two of dirt, which made me worry about punctures. I am a very slow tube replacer in full daylight, I was not keen to find out my speed at night.

Note to self: get a head torch!

I caught up with Shayne just before Morayfield. Fortunately for me he had been cruising after leaving Kilcoy.

We rolled into Morayfield together and decided to have a long rest. Neither of us were particularly hungry. I ate one of my bananas, drank strawberry milk and replenished my water. I poured the last of my drinking water over my head, which was uncomfortably icy. This confused me as when I was drinking that same water it was tepid!

Taking stock of my situation showed I was feeling way better than expected. Slight sore tail, a ‘hot’ pain between the shoulder blades, but otherwise fine. I took two Panadol as an experiment. Not sure if the long break (54 minutes) or the Panadol did the trick, but the pain reduced to mild discomfort. Perhaps a little from column A, a little from column B.

Shayne knew this side of town way better than I did. I have only been along these roads once before. He led us home to the gap. We were both getting tired now, and I know I was thinking my Super Randonneur ambition was unrealistic with my current riding level.  As we approached the end I seemed to gain more energy and I finished the ride smiling!

Many thanks to my ride buddies Ruth and Shayne – you made the trip more enjoyable than I had any reason to expect.