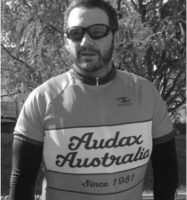 Russell is an Audax member from the ACT.  He doesn’t wear cardigans, isn’t a public servant but does sometimes sport a beard (not in lengths suitable for riding a recumbent).  Russell has been riding for about four years (2011), and first got the idea of doing PBP from a woman in his spin class at gym.

Russell was always a strong rider, storming home to finish the 2011 PBP in 74h25m in spite of having a bad accident on the return to Paris (as documented in the classic PBP article ‘A kick in the bum’, Checkpoint Magazine, Spring 2011).  Russell completed his ACP Randonneur 5000 award in October 2011 and also The Murray 1200 in 2014.  In recent years Russell’s Audax riding has been curtailed somewhat by injury.

Russell has been an incredibly passionate administrator for the club.  He is an advocate of putting your hand up to volunteer, as can been seen by his recent roles on the National Committee:

A couple of examples of his initiatives and policies that have come to fruition are Brevet Gravel (BG) rides and a national ride vouchers system for ride organisers and volunteers (previously only available to Victoria Region members).

As a ride organiser, Russell has run his supported 200/300/400/600 km Politics, Religion & Salvation series on multiple occasions.  He has supported various other rides as a volunteer and has been known to appear on the side of the road in the middle of the night with a welcome hot cuppa for weary riders.  Last year Russell showed his flair as a ride organiser by offering the Gippsland-Monaro Strade Sterrate 600 km supported Brevet Gravel ride through the remote spectacular alpine countryside between Bairnsdale and Canberra (but due to an unfortunate family incident the ride had to be cancelled).  Russell is also the organiser of arguably our greatest brevet, The Snowies Super Randonnee (a special 600 km permanent with at least 10,000 metres of climbing required for the ACP Randonneur 10000 award). Several overseas riders have travelled to Australia just to do this brevet.

But it is in the improvements to our IT systems where Russell has truly excelled.  Over the past 5 years, Audax Australia administrative IT systems have undergone an amazing transformation, thanks to Russell.  He has donated literally hundreds of thousands of dollars worth of IT consultancy free to the club. Apart from making it simply easier for members to enter a ride or apply for an award, these IT systems enhancements have removed large amounts (as in hundreds of hours per year) of manual volunteer labour from Audax administration.  Improvements include, but are not limited to:

There has never been a more worthy candidate for Audax Australia Life Membership than Russell Noble.